Flora Fountain, at the Hutatma Chowk (Martyr's Square), is an ornamentally and exquisitely sculpted architectural heritage monument located at the southern end of the historic Dadabhai Naoroji Road , called the Mile Long Road, at the Fort business district in the heart of South Mumbai , Mumbai , India. Flora Fountain, built in 1864, is a fusion of water, architecture and sculpture, and depicts the Roman goddess Flora. It was built at a total cost of Rs. 47,000, or 9000 pounds sterling, a princely sum in those days .

History of the Flora Fountain is traced to the time when the Old Mumbai Fort was demolished in 1860 as part of the then Governor, Sir Bartle Frère’s efforts to improve civic sanitation (municipal improvements) and the urban space requirements of the growing city. Prior to this demolition, the Fort had been built between 1686 and 1743 by the British East India Company with three gates (the Apollo Gate, the Church Gate and the Bazaar Gate), a moat,esplanade, level open spaces on its western fringe (to control fires) and residences. A small road called the Hornby Road, named after the then Governor of Bombay (Mumbai) between 1771 AD and 1784 AD, also existed at the old Fort area. Consequent to the demolitions, the Hornby road was widened into a broad avenue and on its western side commercial plots were developed to build new commercial buildings in Neo Classical and Gothic Revival designs. The Hornby road, now named as Dadabhai Naoroji Road (D.N.Road), developed into a veritable sight of colonial splendor with Crawford Market linked to the Victoria Terminus anchoring the northern end and the Flora Fountain, forming the southern end of the Mile Long Road. The Flora Fountain was erected at the exact place where the Church gate (named after St. Thomas Cathedral, Mumbai ) stood before its demolition along with the Mumbai Fort. It was constructed by the Agri–Horticultural Society of Western India, out of a donation of Rs 20,000 by Cursetjee Fardoonjee Parekh. Designed by R. Norman Shaw, it was sculpted in imported Portland stone by James Forsythe. A white coat of oil paint has to some extent marred the antiquity of the structure. The fountain was originally to be named after Sir Bartle Frère, the Governor of Bombay at the time, whose progressive policy had resulted in many of the great public buildings of Mumbai. However, the name was changed before the fountain was unveiled as Flora Fountain, named after Flora (mythology), a Roman Goddess of flowers and the season of spring; her majestic and pretty Portland stone statue adorns the top of the fountain. The four corners of the fountain are decorated with mythological figures. The fountain was originally intended to be built at the Victoria Gardens at Byculla but, in 1908, the grass plot and the palm trees that had camouflaged the fountain were cleared for creating space for pedestrians and horse–traffic between the tram lines and the kerb of the fountain . 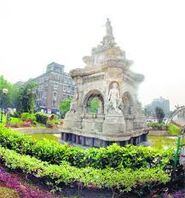 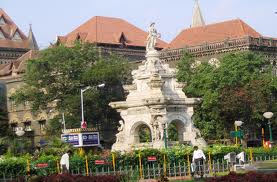 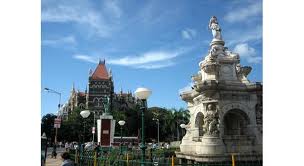 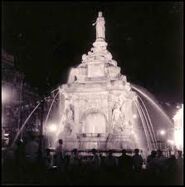 Add a photo to this gallery
Retrieved from "https://mumbai.fandom.com/wiki/Flora_Fountain?oldid=9628"
Community content is available under CC-BY-SA unless otherwise noted.